Here is my A2 Short Film, "IN UNISON". This is the completed version of the film.

Here is my final film review:
﻿ 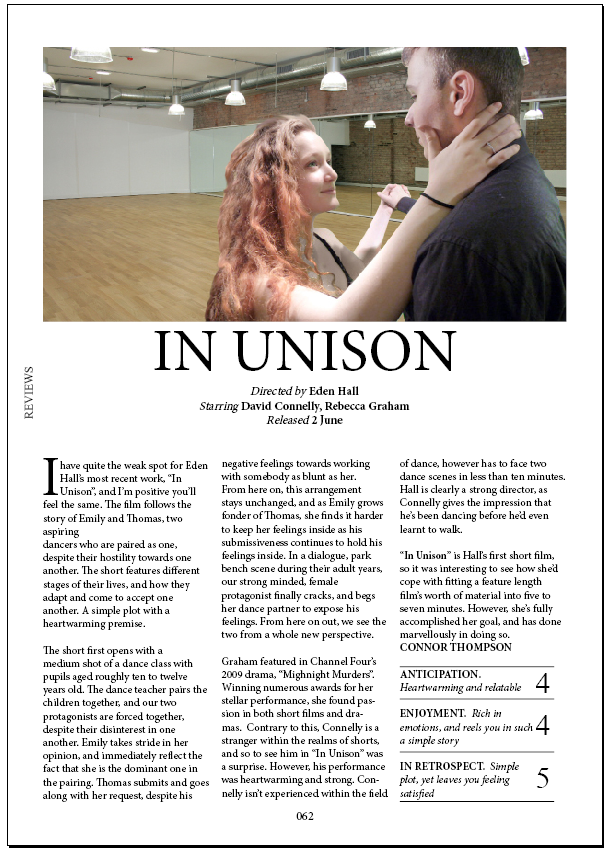 Here is my final film poster: 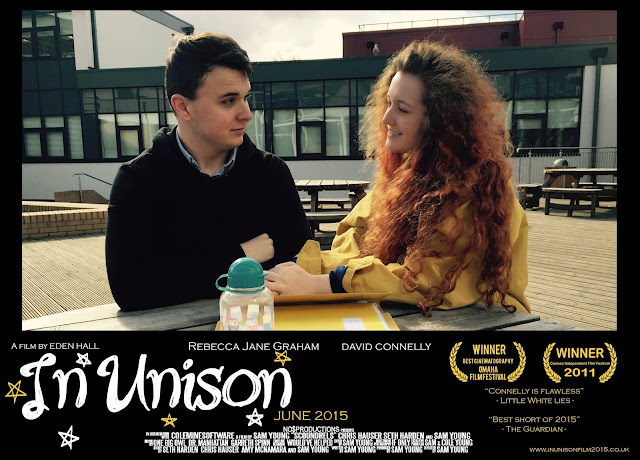 How did you use new media technologies in the construction and research, planning and evaluation stages?


(To be filmed and accompanied by images)

What have you learned from your audience feedback?


I presented my final short film to a group of volunteers and asked them to answer questions I had prepared and to also share their opinions on the product. After reviewing their thoughts, I have learnt that their thoughts were mostly entirely positive, and that almost everybody's favourite part of the film was the elderly scene, and the music which accompanied it.

For my Audience Response (posted below), I interviewed all females for their opinions. This was because it was easier to find females that were interested, which immediately reflected on my expected target audience, which was mostly females aged 15-25. Every individual in the video thoroughly enjoyed it and found it highly entertaining and emotional to watch.
For my questionnaire, I interviewed ten individuals who were mostly male. I had managed to find a male audience who were interested in films within the drama/romance genre, and they happily obliged and watched my short film. They all enjoyed the film, and only one had slightly more critical feedback, including "The acting was good. However, it (not always) seemed a bit unnatural." (this can be seen in the Open Questionnaire Slideshare below). These viewers also highlighted a point I had already anticipated, being the sound quality on some of the scenes. Despite this main point, everybody did enjoy the film and 9/10 of my audience members said that they would recommend the film to a friend.

In summary, I have learnt from my audience feedback that my target audience thoroughly enjoyed my film, and had no improvements for it. I have also learnt that males in particular were able to point out the minor flaws within the film, however did still enjoy it as a whole. I am glad about this, as they were still within the age range I had place my target audience at.

Earlier in the year, I completed my first draft of my short film. I showed it to four individuals and asked for their opinions, and put it into a Prezi. Here are my findings:

I also recorded my audience response once I had fully completed my film.

Closed questionnaire answers from thegardenofedenhall
Posted by Eden Hall at 06:51 No comments:

How effective is the combination of your main product and ancillary texts?

UPDATE: A point not stated in the video is the importance of synergy within the Media industry. Not only does the use of social media and billboards help publicise a film, but the usage of synergy is also a massive factor within this. For example, X-Men: Days of Future Past, teamed up with Mountain Dew energy drink to provide exposure for each other. The Mountain Dew advert played in cinemas and featured the X-Men characters edited into the liquid from the bottle. At the end of the video, the release date for the film is featured, with the film logo accompanying it. Mountain Dew energy drink have a predicted target audience of young males, which is the same target audience as the X-Men films. These two brands fit together nicely as Mountain Dew fans will watch the advert and take interest in the film that matches their interest, and X-Men fans will take interest in Mountain Dew as their favourite characters feature in the advert. The use of synergy is an extreme method of exposure for a film and can reel in quite a large amount of individuals into cinema seats. Synergy is a vital part of the filmmaking and film distribution process, and when compiled with every other form of distribution, they end up with a film with plenty of exposure and publicity, resulting in countless seats sold in a cinema from multiple people form several different target audiences.

Here is the Mountain Dew advert (although this particular video is in another language, however you can see what I've described. Sorry about that!):